The IOG Blythe and Southwark wellhead platforms have been installed by our client Seaway 7, in line with the project schedule. Both platforms are founded on suction piles. Suction piles were selected, because of the hard soil layers, that would hinder pin pile installation. Together, and on behalf of HSM Offshore, SPT Offshore designed and built the suction piles for both platforms. Furthermore, the fast, smooth and noisefree installation of the suction pile were reasons to select this type of foundation for the respective 3- and 4-leg platforms.

The Blythe Hub development gas fields are situated within United Kingdom Continental Shelf (UKCS) Blocks 48/22 and 48/23, and the Vulcans Satellite Development is situated in UKCS Blocks 48/25 and 49/21. Figure 1 hereunder shows the locations of the Blythe and Vulcans Satellites relative to the existing 24” pipeline (PL370) tied back to the gas reception facility at Bacton, Norfolk.

It is IOG’s intention that the fields are developed as part of a larger plan that includes developing two new UK gas hubs in the Southern North Sea based around the recommissioned Thames to Bacton pipeline. The fields that will produce into this pipeline when it is recommissioned will be Blythe and Elgood (The Blythe Hub) and Southwark, Nailsworth and Elland (The Vulcan Satellites Hub). The Southwark platform is  installed in the Southwark field approximately 65 km North-East of Great Yarmouth (UK). The Blythe platform is installed in the Blythe field approximately 35 km North, North-East of Cromer (UK).

HSM Offshore was hired by IOG for the Engineering, Procurement, Construction and Installation of the Southwark Platform and the Blythe platforms Southwark and Blythe. SPT was requested by HSM Offshore to design and construct the suction piles.

The four suction piles of the Southwark platform are equiped with SPT’s Scour Protection System (ScPS). The ScPS consists of a self-deploying set of beams, which support the so-called frond mats. The frond mats have been utilized for scour protection purposes in the North Sea for over 30 years now with great success. The ScPS is a system that allows self-deployment of the system, in parallel to suctioning-in of the SPs and thus does not required post-installation.

Seaway was hired by IOG for the installation of the platforms. They awarded SPT Offshore the suction installation services for Blythe and Southwark platforms. 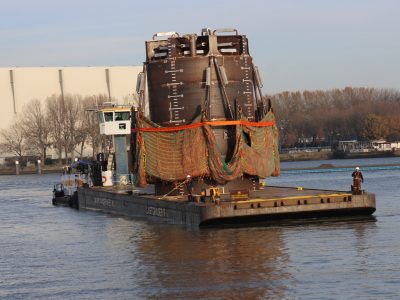 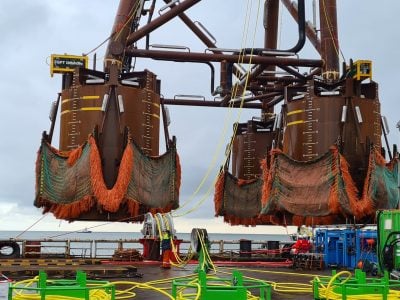 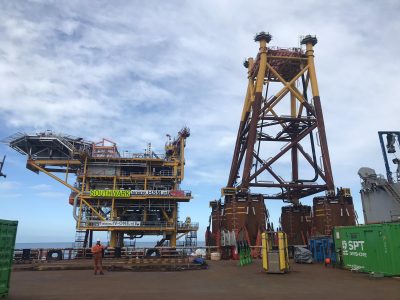